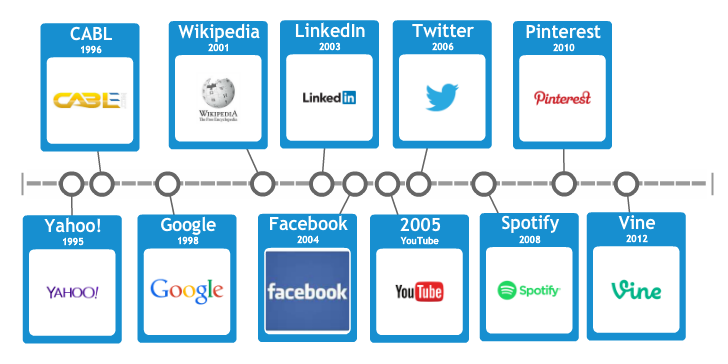 The Cable Addict's Broadband Lounge (or CABL for short) started from a few pages of links and scripts on the CableTools design software (no longer actively developed) web site. The cabl.com domain went live on September 22, 1996 after encouragement from some people on the SCTE-List, which was an email exchange from which many of the first CABL members came. At the start of 1996 there were only about 100,000 web sites total (compared to about 1,000,000,000 today.) Most people only had dialup access, and high-speed 56k modems wouldn't arrive until 1997.

Originally, CABL had much more than jobs and forums, such as a search engine of only cable-related sites, an archive of the SCTE-List, a library and tech sections, along with several others. Focus went into the list archive, search engine, and other parts at first. The jobs section was part of what was called The Bar, which was then just another section among many and not the main endeavor it later became. Many still refer to CABL as "the Cable Bar" because of its importance to the site. Back then it was just a simple set of scripts for posting messages. There was no membership or login; the person put in their email address for every post.

Pictured here is how the site looked at launch in 1996. To see how the site appeared at various times, visit the Internet Archive's Wayback Machine. 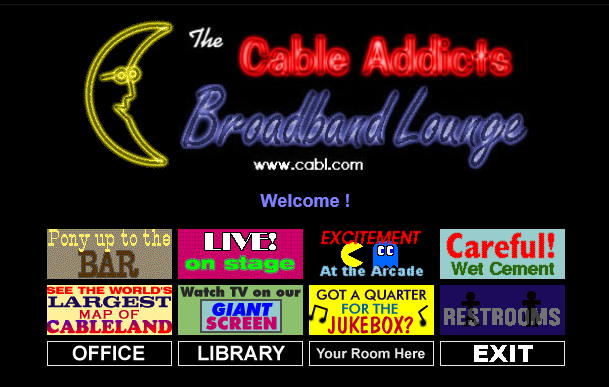 Tech nerd details: CABL began life on a i486 machine running Apache web server on the FreeBSD operating system. It was housed in the owner's basement and connected to the Internet via a single dedicated POTS line. Not quite today's TIA-942 standards, but back then everyone was accustomed to sites being offline for a few hours every now and again anyway.

As of today CABL has been in operation for a total of 9,533 days.

Evolution of the Bar

Throughout the late 90's the Internet grew quickly and CABL went through many renovations. Full web search engines like Yahoo!, MSN, and AltaVista made the cable search engine section redundant. The List manager software used by SCTE-List added its own archive feature, making CABL's archive for it redundant too. The Bar section had grown to be very popular, and became the new focus by default. The other sections were gradually abandoned. Eventually, as CABL became equivalent to the Bar, the Bar was no longer used for the section name and now everything is referred to as just CABL.

The Internet didn't meltdown in Y2k as many expected, so on we went. Memberships were first instituted in a major renovation at the end of 2000. Account #1 was the Archive account used as the "member" id for the messages already in the database. Account #2 was the original "admin" account, and the owner took #3. After that it was whoever signed in first. There were about 1000 accounts created immediately. Those first 1000 accounts get the moniker CABL Addict. The reason the first few thousand member accounts have "1996-2001" as the registration date is there wasn't a date assigned to new accounts in the database early on, so now we can only approximate from the member number.

As of today there are 131,135 accounts registered.

From the beginning, CABL was completely free to advertise. However, this caused several problems that had to be resolved for the longterm good. The incredible growth in popularity was demanding resources that weren't available since the site was still, at the time, just a hobby for its owner. Thousands of people were relying on the site as standard practice in their professional lives every day. After one excessively long outage, it became clear from the voluminous outcry that CABL had to become a self-sustaining entity.

In 2002 CABL began selling banner advertisements. This helped with funding, but didn't address another major problem: free ads. When an ad costs nothing, chances are it will be worth what it cost. Constant repeats, frivolous, and possibly outright scam ads overrun the genuinely good ones. CABL recognized this and, after an attempt with Verified accounts resulted poorly, went to pay-per-ad in 2003. Employment ads were $29.95 but discounted to $10 while the system was fully established. The result was very successful and, while there were fewer ads overall, the signal-to-noise increased immensely.

No history of CABL could be complete without inclusion of what was called Wet Cement. This was originally a guestbook script, common on early web sites, where visitors could leave an "I was here" note. Long having outlived its original purpose, it was removed in 2002. The old Wet Cement has hardened up, but visitors can still view the original entries here: Wet Cement.