If you are out of state, you can fly into New Orleans or Gulfport and I will come pick you up from there.
Click for full size 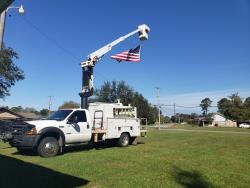 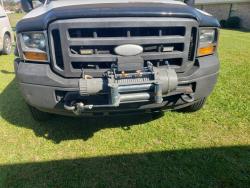 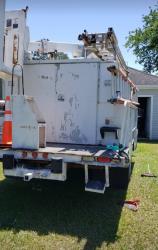 It has the good stud bolts in the heads. The engine was taken out 3 or so years ago and every seal replaced. It has the erg delete kit on it that includes a coolant filter. It has an 18k winch on front that can be taken out and moved to the back hitch. There is a forklift power connection in front and back for the hookup on the winch. It has an additional 40-gallon fuel tank on it with a nice diesel filter in the back driver's side bin. There is a switch in the cab to transfer fuel into the main tank even while driving. It has a great flasher light kit on it. You can go into night mode and change the flash rate. It has power windows and tinted windows. It has footsteps outside doors that the previous owner had installed. It has a big screen radio that shows the backup camera (having some issues, working on that now) when you put the truck in reverse. It has a 2000-watt inverter with a cord that runs into the cab with a 4-socket outlet. It has a custom 2-inch hitch receiver that is stout. It has a remote start and a security system with pins on every bin. You can use the app on your phone to start the truck and track it on a map if someone steals it. You can lock and unlock with your phone too. The boom has a knuckle. I think it's rated at 42ft from ground. It has a remote in the back bin to work the boom from the ground. It has bucket seats in the cab that the previous owner had installed. They are in great shape. It comes with a couple ladders. I have a 28 ft that is the light version. It's similar to the black ladders you can buy that are super light. It has a programmer so you can change the engine and transmission from economy to heavy trailer, and a few more options. It also will give you codes. It has a hood visor and window visors to protect from rain. The boom has a remote control so while you are working in the air, you can shut the boom off because the boom revs the engine up to operate. Recently had the controls checked.